USDA's MyPlate Challenge: How do we get enough time to eat healthy?

I like to eat about as much as I like to workout so, you could say, food and foodways (the study of the norms and traditions of eating and meal taking) really interest me. This is not just because I'm a nerdy anthropology graduate student, but it's also because I'm a parent of two school-age kids and the primary "food production specialist" in our household (e.g. I do the cooking). Since I work and workout nearly everyday, I don't have a lot of "extra" time to prepare the family meals from scratch. When I worked full-time at a local company, I had even less.
In June of this year, the USDA replaced it's MyPyramid icon on healthy nutrition with a strikingly better icon based on a dinner plate called MyPlate according to an informative and well-written article on GoodGuide.com. The MyPlate icon, using the familiar symbol of a dinner plate, is a such better way to explain nutritious proportions of macronutrients to kids and adults than the previous symbol that I wonder that they didn't think of it before. 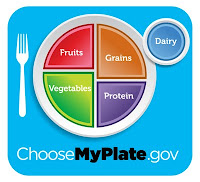 With MyPlate (see graphic on the left) it's easy to visualize that 50% of a meal should be veggies and fruits, 25% protein and so on. The icon of the glass of milk I don't agree with as there are better sources of calcium than dairy, but I figure the folks at the USDA  had to give in on something to appease dairy industry lobby. What is noteworthy is that "Grains" are no longer the staple macronutrient. They are no longer the base of the traditional food pyramid, so to speak. For most Americans, this nutritious diet plan will be easy to understand but difficult to employ.

The hard part of the MyPlate nutrition plan will be getting the time to cook healthier meals in our industrialized, dual-earner-families-are-the-norm culture where more often than not, families are eating out.  In the United States “restaurant bills account for 48 percent of spending on food” in 2008 according to National Restaurant Association (Bunker 2009).
How will we translate the healthy precepts of MyPlate's nutrition recommendations into a practical plan for the typical busy professional who doesn't have the time to cook every meal from scratch and relies on prepared or fast-foods?
“Today the average American spends a mere 27 minutes a day on food preparation (and another four minutes cleaning up),” according to nutritious food advocate and professor of journalism Michael Pollen (Pollan 2009). That is less than half the time spent cooking and cleaning up forty years ago (Pollan 2009).
Obesity rates are inversely correlated with the amount of time spent on food preparation according to a cross-cultural study led by Harvard economist David Cutler in 2003 (Pollan 2009). Some people guess this has to do with women entering the work force in the United States. However, food preparation time has also declined in households with stay at-home wives due to the increased availability of convenience foods (Pollan 2009). In the industrial economy, affordable fast food outlets provide calories for busy working people who don’t have enough time to prepare meals at home from scratch. Processed convenience foods are marketed to women, the traditional home meal specialists, as emancipatory.
What we will need is a huge cultural and economic shift towards restaurants and markets selling healthier prepared meals with a higher proportion of fruits and vegetables. We can market the dietary shift to Americans as emancipatory and healthy.
All civilizations have been based on surpluses of grains or starches. Even the ancient civilizations such as the Mesopotamia, Maya, Chinese, Yoruba, and Inca relied on either a surplus of wheat, cassava, rice or corn to feed the masses as well as to provide wealth to finance for their civilization's growth (Trigger 2003). The United States, socially and economically, is no exception. “Grain is the closest thing in nature to an industrial commodity: storable, portable, fungible, ever the same today as it was yesterday and will be tomorrow,” says journalist and food activist Michael Pollen. He adds that, “Since it can be accumulated and traded, grain is a form of wealth…throughout history governments have encouraged their farmers to grow more than enough grain… (Pollen 2006:201).” It's no accident that most fast food and packaged snack foods are based on corn, wheat,  and rice. These grains are the foundation of many an American's diet and are also government subsidized, inexpensive (e.g. highly profitable for food manufacturers). They are also the pillars of our economy as well as our diet.
But it is these pillars that are also making us sick. The cheap processed grain-based foods are contributing to the epidemic of chronic diseases (diabetes, heart disease, some say cancer from processed grain-based foods) and the epidemic of obesity in this country.
“Chronic diseases—such as heart disease, cancer, and diabetes—are the leading causes of death and disability in the United States. Chronic diseases account for 7 out of 10 deaths among Americans each year,” according to the U.S. Centers for Disease Control (Centers for Disease Control 2009). Today, heart disease is leading killer worldwide but was rare in ancient societies other than in the very elite upper classes who had access to high sodium preserved foods, more sweets and more calories in general (Winslow 2009:A5). As the most lethal chronic disease, some believe it is an unavoidable consequence of the modern diet. 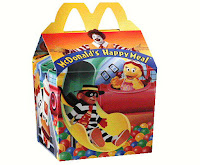 Happy Meal Makeover: First Lady Michelle Obama praised McDonald's reduction of fries (from 2.2 oz to 1.1 oz) and the addition of a side of fruit in their iconic Happy Meals as "first steps."on the Obama Foodorama blog.  The First Lady has been advocating for more healthful foods served to children in restaurants in her Let's Move! campaign to end childhood obesity. The USDA tries to tackle the junk food preference of many children with their "Ten Tips Nutrition Education Series.
I hope these initiatives work but it will take time for both kids and their parents, raised on french fries and junk food, to develop a taste for more veggies, fruit and other healthier choices. Food gurus such as English chef Jamie Oliver realize how difficult it is to change culturally bound eating habits on both sides of the Atlantic. He is trying to get American kids to eat a healthier diet that will make them smarter and more slender by taking on the food lobby controlled lunches in the American school system in his television show Jamie Oliver's Food Revolution (Gordinier 2011).
Our biggest hurdle to clear towards healthier eating in this country will be more than just educating people on nutrition and getting nutrition information posted in fast food restaurants. It will making nutritious foods available to Americans more cheaply, already prepared and available virtually everywhere. Especially since so many meals are eaten in the front seat of a car these days.
We may need another icon for that campaign. MyBag anyone?
.....................................................................................................
Cited Non-Linked Resources:
Bunker, Katie (2009) “ On the Menu: Nutrition Facts May Be coming Soon to A Restaurant Near You,” Diabetes Forecast, Pp. 72-75.
Centers for Disease Control and Prevention (2009)  “Chronic Disease Prevention and Promotion,” U.S. Centers for Disease Control and Prevention web site,retrieved on November 24, 2009, from: http://www.cdc.gov/nccdphp/
Gordinier, Jeff (2011) "Will Work 4 Food," Outside Magazine, September, pp.66-68.
Pollan, Michael (2006) The Omnivore’s Dilemma: A Natural History of Four Meals, New York, NY: Penguin Group, Inc., Pp. 450. Pollan, Michael (2009)  “Out of the Kitchen, onto the Couch,” New York Times Magazine, August 2, 2009, Pp. 26-47. Trigger, Bruce (2003) Understanding Early Civilizations, Cambridge University Press, MA, pp.757. Winslow, Ron (2009) “Curse of Heart Disease Is Found in Mummies,” The Wall Street Journal, November 18, 2009, P. A5.

Posted by Angela Kirwin at 6:13 PM